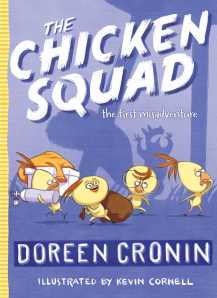 The Chicken Squad: The First Misadventure

At the time of this review there was one The Chicken Squad book available and another planned for release later this year.

Doreen Cronin, author of the hilarious, award winning, best selling Click, Clack, Moo: Cows That Type picture book, has written the first of a chapter book series. This festive, zany backyard romp is made all the more enjoyable by the addition of Cronin’s returning character J.J. Tully, a retired search-and-rescue hound from the J.J. Tully Mysteries series.

The Chicken Squad: The First Misadventure opens with J.J. Tully’s introduction of each chick. Although each has a different name and specialty, each is described the same: “short, yellow, fuzzy.” It’s a cute calculation that brings a smile right away. At the end of the introduction phase, J.J. Tully invites the reader into the action, and—poof!—the reader is smitten with the story.

Then the book changes to the chickens’ point of view, and the four are wisecracking, old-time, gumshoe detectives. The mystery that needs to be solved is brought on by a terrified squirrel, who sees something “big and scary” in the yard. For most of the remainder of the book there are pratfalls, confusions and chaos. Inventive use of personality, language and shapes transform this from the usual beast into a chapter book of big-top proportions.

I love the inspired mystery and characters, and Cronin’s use of repetition and comedy are masterful. I do wonder if there’s so much action and so many characters that not all children will easily follow the story. And with jokes about dead squirrels and atmospheric disturbances, there will definitely be children who just don’t get it.

The illustrations carry no such conflicted opinions. They are deep, rich, edgy and completely endearing. And super whammy funny. Cornell’s use of both expected and off-kilter perspective keep each page turn full of anticipation and joy.