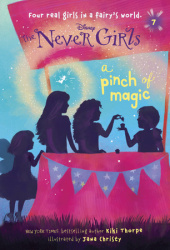 Never Girls #7: A Pinch of Magic

At the time of this review there were eight books in the Never Girls series, with more scheduled in the coming months.

Who wouldn’t want to go to Never Land?

Never Girls #7: A Pinch of Magic is based on the brilliant premise that there’s an angle to the Peter Pan story especially for girls. With a nod to Narnia, four friends have access to that mythical place through one’s closet. In Never Land, the four make friends with fairies, who provide magical adventures.

In this seventh book in the series, there’s an alternating plot that has both the real girls and their fairy counterparts baking sweet concoctions. The stories collide when the fairies are called upon to help the real girls, in the real world. It’s a smart twist: just like Pan had to have his shadow sewed on by Wendy, so our protagonists have to rescue a fairy from the freezer aisle at the grocery store. Kind of funny stuff.

Part Rainbow Magic Fairies, part Pony Pals, this fluffy version of Pan is accompanied by dreamy, soft illustrations. Artist Christy does an excellent job making clear the scale of the real-girl world and the fairy world, and keeping both a timeless quality and a contemporary ambiance.

This might not be the high art of J.M. Barrie, but as a contemporary chapter book, it’s got some serious fairy dust.